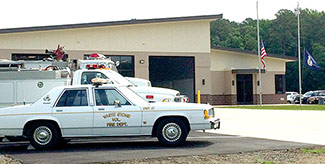 The 12,600-square-foot facility was designed by Randall Kipp Architect Inc. of Irvington and built by Norman Company Inc. of Mechanicsville. WSVFD moved into the building in March 2018.

Speaking during the dedication ceremony, former chief and life member Randy Reeves noted how far the department has come in just over 70 years. His grandfather, B.H. Reeves, and father, R.S. Reeves, were charter members. His grandfather was the first chief and his father, the second.

His son, Ran Reeves, is a current member, representing the fourth generation of Reeves to serve.

Reeves recounted the story of the WSVFD’s first fire…