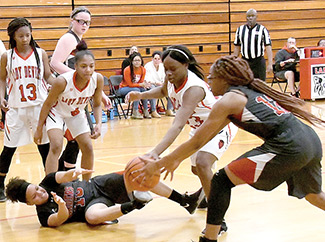 Rappahannock knocked both the Lancaster boys and girls varsity basketball teams out of the Northern Neck District tournament Monday night. Although the tournament finals were scheduled at LHS February 13, neither of the Red Devils teams vied for the trophy.

Colonial Beach was a 58-53 winner over Washington & Lee in the other boys semifinal to set up a Rappahannock versus Colonial Beach championship game.

In the girls championship, Rappahannock faced Washington & Lee, a 70-33 semifinal winner over Essex.