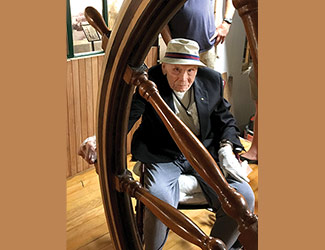 In 1929, Dr. Lee Williams was five years old when he traveled with his mother, Frances Lee Williams, on the Steamer Potomac.

Two events have stayed with the 95-year-old Irvington resident about that trip. The first is that while aboard he swallowed a penny. His worried mother asked the Potomac’s captain, Archibald Long, to check on her son. After examining the child, the captain pronounced, “This too will pass.”

All was well and Long invited the youngster up to the wheelhouse to touch the huge wheel. This was an experience Williams never forgot.

On May 29, the Potomac’s pilothouse, including the wheelhouse was installed in the Steamboat Era Museum, 156 King Carter Drive, Irvington. Williams celebrated his 95th birthday June 12. His wish to revisit the Potomac wheelhouse and touch the wheel again was granted on August 23.

With help from his son Phillip Williams, a museum board member and a leader in the restoration effort to restore the pilothouse, as well as John Morgenthaler, the restorer of the pilothouse, and others, Dr. Williams was lifted into the wheelhouse.

Ninety years after his first visit, he again touched the Potomac’s wheel.