Excerpts taken from the January 31, 1991 edition of the Rappahannock Record

Hearing set over odor in Reedville

Sometimes it smells like a dirty wet dog and sometimes like something worse. However it smells, the state Air Pollution Control Board will hold a public hearing on the odor on Monday, Feb. 11. 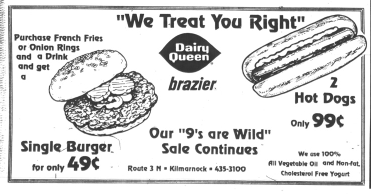 The odor is strongest in the Reedville area of Northumberland County, but can be noticed far afield. Because of the location, accusatory fingers are pointing at the area’s two menhaden fish processing plants.

“The whole purpose is to determine whether there is an odor objectionable to citizens of ordinary sensibilities,” said Richard O. Stone, spokesman for the Air Pollution Control Board. “Nothing has been determined at this point.”

Stone, an environmental inspector, said the Feb. 11 hearing will be the first one held in 10 years on complaints about odor in the Reedville area.

The hearing will be held at 7:30 p.m. in the auditorium of Northumberland High School in Heathsville. Stone said persons who plan to attend the hearing should address two questions, “Do you think there’s an odor and where do you think it’s coming from?” The hearing will be conducted by staff from the Air Pollution Control Board’s regional office in Fredericksburg as part of an investigation of complaints about an odor in the Reedville area.

Stone, an environmental inspector, said the complaints were filed in groups of ten to 12 phone calls on two occasions, one in June and the other in November. He added, we had some others sporadically throughout the summer.”

The alleged source of the odor are processing plants operated by Ampro Fisheries and Zapata Haynie Corp. The two operations are unrelated, but produce similar products. Menhaden fish are cooked into fish mean and oil at the plants.

If one or both of the professing plants are found to be in violation of Air Pollution Control Board standards of measuring odors, the consequences could be costly for the operators. Stone said the could be required to submit plans on how to reduce the odor. The plans would be condsidered in light of their economic and technical feasibility, he said.

Middlesex teen to face murder trial as an adult, on his 18th birthday

A 17-year-old accused in the shotgun slaying of his 14-year-old girlfriend’s parents chose las week to waive a public hearing and be tried as an adult.

He will face trial in the double murder on May 29 — his 18th birthday. 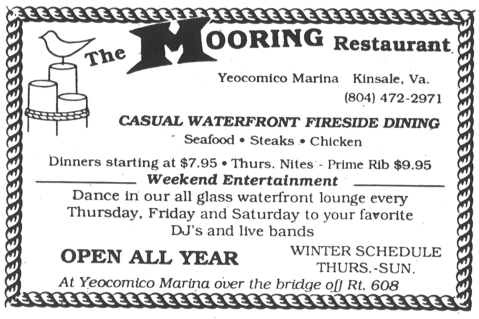 Douglas Christopher Thomas is charged with capital murder, first-degree murder, and two counts of using a firearm in commission of a felony in the Nov. 10 murder of J.B. and Kathy Wiseman. Tried as a adult, the teenager could face life imprisonment or the death penalty if convicted on the capital murder charge.

Wiseman, a Middlesex County waterman, and his wife, both 33, were killed the bedroom and hallway of their Middlesex home. Police have indicated the slayings may have stemmed from the couple’s opposition to the wishes of their daughter and Thomas to marry.

Jessica Wiseman is too young to be tried as an adult. Because she is under age 16 she cannot be charged with capital murder, but faces two juvenile petitions charging first degree murder. Her trial, originally scheduled to begin last week has been postponed until Feb. 27 at her attorney’s request.

Thomas court-appointed attorney, Benton H. Pollock sought unsuccessfully las month to have the transfer hearing closed to the public. Reports of details in the case, he said, would keep his client from getting a fair trial.

“I don’t think you could find a juror in the county that has not read about the case, at length,” he said. Citing publicity, Pollock said Tuesday that he will seek a change of venue, which would move the trial from Middlesex County.

If Thomas had chosen to go ahead with the hearing, Middlesex County Commonwealth’s Attorney James H. Ward Jr. would have had to provide a summary of the state’s case. Ward has said he was prepared to show evidence why Thomas should be tried as an adult and to discuss the defendant’s prior juvenile record.