Excerpts taken from the June 29, 1950 edition of the Rappahannock Record 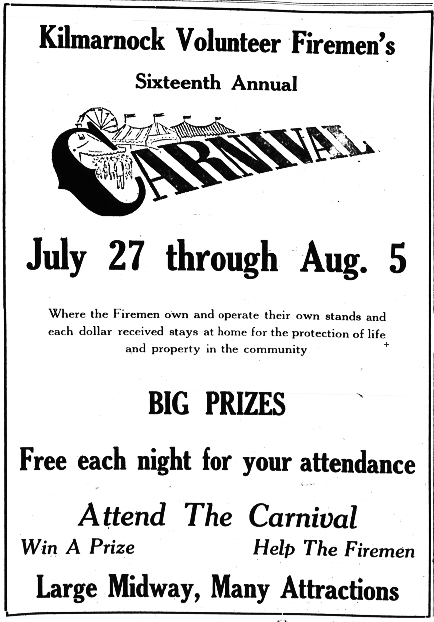 Carnival time is almost here again. The volunteer fire departments of the Northern Neck have been working for several weeks in preparation for these annual events which are put on for the purpose of raising enough money to operate the fire trucks which provide protection for the business places and homes of the area.

The first carnival is scheduled at Burgess Store, where the Fairfields Volunteer Fire Department will conduct their fourth annual event throughout the week beginning next Monday, July 3.

The next week the White Stone Volunteer Department will have their  carnival July 10 through 15, to be followed by the Upper Lancaster Volunteer Fire Department carnival at Lively from July 13 through 22.

The Kilmarnock Volunteer Fire Department has scheduled their sixteenth annual carnival to be held on their carnival grounds here for the ten-day period, July 27 through August 5.

The Callao Volunteer Fire Department has planned a carnival for August 3 through 12.

The Fairfields firemen have planned a number of special features for the annual carnival at Burgess Store which they hope will be bigger and better than ever. 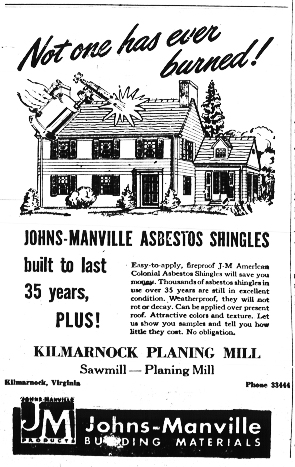 A free aerial act will also be staged each night. On Wednesday afternoon a special matinee will be held for the children. The firemen promise new and better rides, excellent food and free parking space for everyone.

No one was injured Tuesday night when the Menhaden fishing vessel Peconic of the McNeal Company of Reedville sank in the lower part of the Bay.

The Peconic went aground in the slough coming in from the ocean late Tuesday afternoon during a heavy rain storm. The wind was blowing a gale and the seas were heavy at the time. 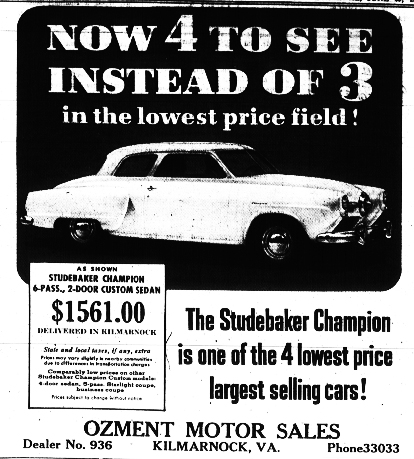 The Froehlich of Standard Products Company after pulling the Peconic off the ground was towing her into the harbor at Cape Charles when she sank in the channel.

Captain Massey Jones and the 28 members of the crew took to the purse boats or were taken off by other boats. The John O. and the Henry W. Conant took most of the crew members aboard. All were transferred to the Conant and brought to Reedville early Wednesday.

The Peconic was partially loaded with fish at the time.

The extent of the damage to the vessel or plans for her recovery had not been determined yesterday.