Excerpts taken from the October 2, 1930 edition of the Rappahannock Record

Trucks In County This Year Increase By Third

Automobile and truck licenses to the number of 1870 had been sold during the nine months of this year up to October 1 by S.C. Eubank, who for the past two years has been acting as agent for the distribution of tags in Lancaster County. Of this number 1700 tags have been issued for automobiles and 170 tags for trucks. 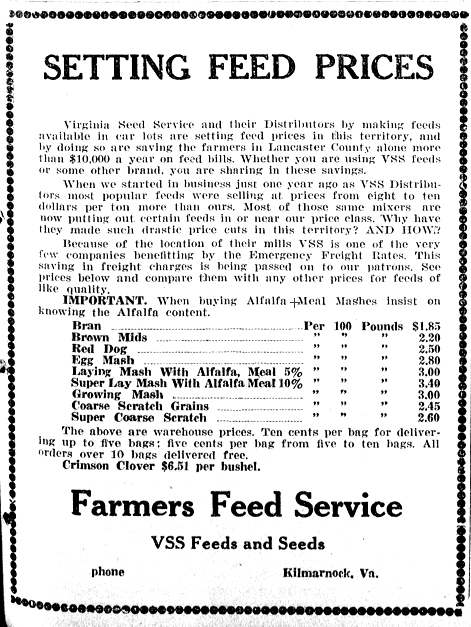 While Mr. Eubank has sold that many tags this year it does not necessarily mean that there are that many automobiles in Lancaster County. Mr. Eubank says that he is allowed to sell to anyone out of the county and that he has sold many tags to people from other sections especially to the people of lower Northumberland County.

The number of tags sold this year is already greater by three than the number sold for the entire year in 1929 and Mr. Eubank states that he expects to sell several tags yet before the end of the year as the price on tags is reduced at the beginning of the month. 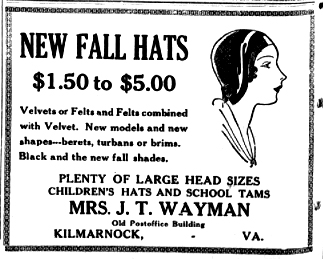 While the total number of tags for automobiles is still 42 behind the record of last year when 1742 automobile tags were sold. Last year only 125 truck tags were sold whereas 170 of these have already been sold this year. This increase of 45 truck tags over last year is probably due to the improvement of the roads in this section and the shipping of products by truck rather than by boat.

Not only has the number of trucks increased but the are of larger size than last year. Many of the trucks now, according to a statement by Mr. Eubank, are of a ton and a half capacity whereas last year many of them were only ton trucks…. 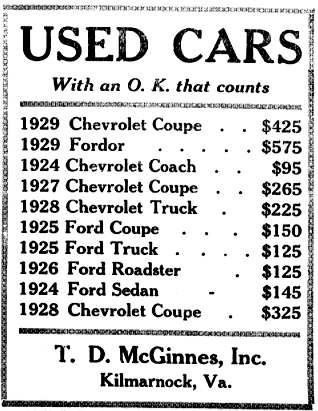 Last Concrete On Bridge At Totuskey Is Poured

The last concrete in the construction of the highway bridge at Totuskey was poured Monday afternoon. The roadway has been laid some time and now the last of the railing has been completed. The work of removing the forms for the concrete is expected to take about two weeks.

After the new bridge is completed and opened to traffic the old structure will be removed.

Isaac Norris is a poor shot with a pistol, according to witnesses who say he fired three shots at close range at Cephas Carter Saturday night in from of Eubank Bros., store. One of the bullets passed through the trousers of Carter but missed him entirely.

Norris after looking at the result of his target practice dodged behind some automobiles and ran down the street. Sunday, it is said, he stole a car belonging to Mary Wilson and with several others left the county. The car was a Chevrolet sedan with license tag number 57,673.

The affair happened about 11 o’clock and created no excitement as only a few persons heard about if. Most people who heard the shots paid no attention to them as the thought them to be fire crackers of an automobile back firing. It was Monday before many of the people in town heard of the incident.

The county authorities have been on the look out for the man doing the firing by so far he has not been located.