Excerpt taken from the July 17, 1986 edition of the Rappahannock Record

An ashen faced and shaken Emerson Eugene Stevens was led away by Sheriff’s Department Deputies Saturday night after being sentenced to 164 years and one day on two guilty verdicts in the murder and abduction of Mary Keyser Harding last August. Stevens faced his second trial last week after his first in February resulted in a hung jury. 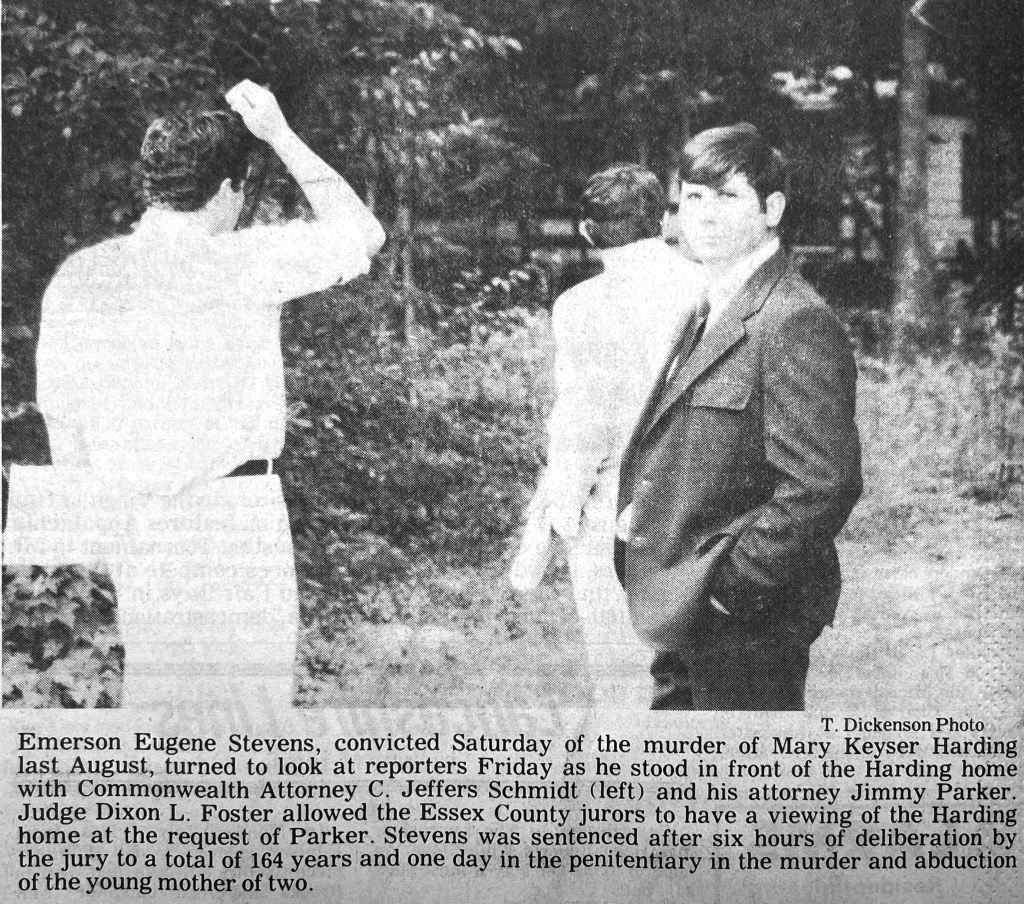 His shocked family and friends watched, some sobbing openly. Jimmy Parker, attorney for Stevens, stated as he left the courthouse, “In my heart, in my soul, I feel he is innocent,” and acknowledged he would appeal the decision.

Jurors had originally returned both verdicts after 6 hours of deliberation to read “not less than.” On the instruction of Judge Dixon L. Foster the jury was sent back to restate the sentences more specifically. They returned quickly, after deleting only the offending words, making no changes to the actual sentence.

The expected motion by the defense attorney to set aside the verdicts on grounds they were contrary to the law and the evidence in the case was denied by Judge Foster. Stevens will be sentenced September 12 at 1 pm. following a presentencing report to be prepared by the court.

A request by Parker for his client to be allowed to remain free on bond, so he might have time to get his affairs in order, was also denied by Foster. Commonwealth Attorney C. Jeffers Schmidt had opposed the motion in light of the charges and the sentencing recommendations of the jury. As Schmidt walked over to shake hands with the defense attorney after Stevens left the courtroom, Parker turned away from him and said, “Not on your life Mr. Schmidt, would I shake your hand, not on your life.”

The reaction was not unexpected after numerous charges by Parker during the trial of legal misconduct by Schmidt. Parker reaffirmed earlier comments following the trial that he would file a report against Schmidt with the Virginia State Bar on Monday and with the Virginia State Police against David M. Riley, chief investigator in the murder, on charges of withholding evidence, coaching witnesses and encouraging witnesses to commit perjury on the witness stand.

Schmidt, who did not use the courtroom arena to defend himself against the charges, but chose to deal only with the credibility of the witnesses making the charges against him, said after the trial, “It is obvious from the verdict that the jury disregarded the allegations he made. His smear tactics were ineffective and unfounded.”

“I’m satisfied with the verdict because it shows that the system does work. It showed the hard work and through investigation done by law enforcement authorities,” Schmidt said. He declined to comment on perjury charges against witnesses at this time, saying that, “It is my belief that an independent agency is investigating witness irregularities.”

The six day trial, frought with emotion and rampant with accusations of lies, charges of, witness manipulation and misfeasance from both sides, finally wound down at 9:30 Saturday evening. Over 50 witnesses testified during four days enduring grueling questions from both the prosecution and the defense.

The testimony of Anne and Louis Dick, witnesses for the Commonwealth, broke the flow of the prosecution’s case Wednesday when Anne Dick, unlike her testimony in the February trial, said she was no longer sure it was Emerson Stevens’ truck she saw in the early morning of August 23 pulling out of the road to Morattico. Under cross-examination by Parker, she said Schmidt and State Police Investigator Riley both aware of her misgivings. In February she was positive the truck she’d seen had belonged to Stevens, but became confused under cross-examination by Parker when asked to identify the make and kind of several trucks similar to that of Stevens from photographs.

She said as late as last Sunday night, after contacting Schmidt, she was still unsatisfied. “He told me to put him up high in the seat, behind the visor and to put the red plaid shirt on him,” she said.

A hair said to be “like that of Mary Harding” by a forensics expert was found on a red plaid shirt in the cab of Stevens’ truck.

She testified in the earlier trial the driver was wearing a plaid shirt but she could not identify the color or driver. She said Wednesday the driver had been too thin to have been Stevens and Riley had told her not to testify about the size of the person in the truck.

Her husband Louis Dick corroborated her testimony and said he remembered Riley telling her, “I don’t care if they stand you on your head, don’t place anyone other than a person in a plaid shirt in that truck.” Dick said Riley indicated their testimony was needed to bring out an accomplice at a later date.

A former Maryland State Trooper, Dick said information he had gathered was given to the police but not used because it was contradictory to pinpointing Stevens. He said he also had misgivings about the way the State Police had handled the investigation of the murder.

Both witnesses also said testimony by Riley and Sheriff’s Deputy Bruce Boles, about the first interview with Stevens on the front porch of the Harding home lasting only 10 or 15 minutes, was contradictory to what Riley had told them. Anne Dick said Riley said he had questioned the defendant for one or two hours and had done “everything but take him over and throw him on the flowers on the grave” to get him to talk.

In order to discredit the testimony of Anne Dick, Schmidt produced two witnesses on Friday to say the Dicks had been upset with the Commonwealth Attorney because of a summons issued to them for a dog license.

Linda and Philip Cockrell said separate conversations with the Dicks indicated they were very upset with Schmidt over the matter of the summons. Philip Cockrell said Anne Dick had told him she had come to Schmidt for help and he instructed her to go to court. “She said you walked out when it came time to testify. She said you were going to pay for it dearly,” he told Schmidt.

Linda Cockrell said Anne Dick indicated to her, after the summons experience, “she had some things [on Schmidt] and she was going to get even.”

Additional surprise testimony came when the defense attorney placed Emerson Stevens’ father on the witness stand to testify that he had thrown a Wildcat Skinner knife owned by his son away when they began to hassle Stevens about it. “I throwed it in the woods. I told him a day or so after that I’d done it,” he said. Stevens maintained throughout the first trial that he had never owned a Wildcat Skinner knife despite testimony from several witnesses that he had.

Stevens followed his father on the witness stand and when asked by Parker if he had told the truth about the knife, he said, “Not exactly, I didn’t want someone to think I was the one that killed the girl, using that knife.” Schmidt’s cross-examination of Stevens dealt with the contradictory testimony from the prosecutions witnesses and Stevens testimony in the last trial.

During closing arguments Schmidt recounted the testimony of each witness, taking 2 hours, a half-hour over the time allotted by Judge Foster. He asked jury members to “use you common sense to determine who is telling the truth. When we use our common sense we can tell a lie. Lies will catch up with you sometime. He’s been tripping all over his lies, using lies to cover up lies, to cover up lies.”

Parker maintained that jurors had “witnessed our system operate at its worst.” He said Schmidt’s argument was “convoluted, twisted, inaccurate and a lie.”

The defense attorney said “whether you had the knife or not ? it would not make any difference because the knife is no evidence. There is nothing at all positively linking Emerson Stevens to this crime beyond a reasonable doubt.”

The fact Stevens admitted to lying about the knife was commendable, Parker noted. He said it was only natural Stevens lied to police, because he was afraid. “You can understand how a frightened man lies about some things.”

Parker told the jury that Lancaster County “has been a community of fear since August 25, a community divided since the death of Mary Keyser Harding.” He said the police had “tunnel vision” which kept them from properly investigating anyone else but Stevens. In his final address to the jury Schmidt reminded them not to be persuaded by the lawyers. He told the jurors the case should be decided on the “…credibility of the witnesses. That’s what it’s all about.”