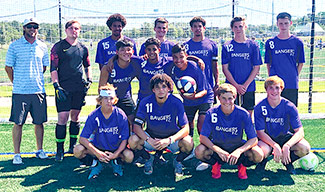 High school soccer players from across the state took to the fields for three days last weekend in a 50-team invitational in Williamsburg.

Pittman fielded a team of players from Northern Neck District schools Lancaster, Northumberland and Rappahannock and had one player from King William County. Pittman’s Bangers FC went 0-3 in the tourney.

“It wasn’t how we’d hoped it would go, of course,” said Pittman. “But they had a good time. It was a great opportunity for …[to-view-more]