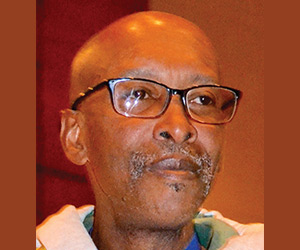 Wargo surprised Barnes last week with the announcement at a track and field meet in the presence of his family, colleagues and student athletes from Northumberland, Lancaster, Essex, Washington & Lee and Rappahannock high schools.

“We are thrilled to recognize Coach Barnes as the Division Teacher of the Year,” said Wargo. “Coach Barnes exemplifies dedication, professionalism and a relentless commitment to his students and student athletes.”

Barnes has been educating children for 38 years. His methods have changed very little over the years, but he said, “It still feels fresh. You have to love what you do.”

He credits his faith with leading him to focus on the good in himself and others rather than to dwell on the negative. “If you respect kids and your colleagues, sooner or later they will respond. Everyone has something in them they respond to,” he said.

Barnes refuses to overlook students with less talent or self confidence. They are encouraged to grade their own work, which provides an opportunity to focus on self-esteem issues and expand how they view themselves. He challenges kids not to compare themselves to others, but to see their art as a reflection of who they are.

It’s easy to be successful if coaches have Michael Jordan on the team, he says. Real success comes when they don’t have kids with lots of natural talent.

“You have to make a way for them to be successful. If you’re able to get kids to do things they think are impossible, then you’re successful,” said Barnes.

He inspires students to aim higher. He is often heard telling others, “If you believe it, you can achieve it.”

His passion for coaching students in track and field and cross-country was recognized in 2015, when he was inducted into the Northern Neck Wall of Fame.

But, he shies away from being singled out with rewards. “There are so many great teachers at Northumberland schools. I thank you all, but I am just a representative of the great teachers here,” said Barnes.