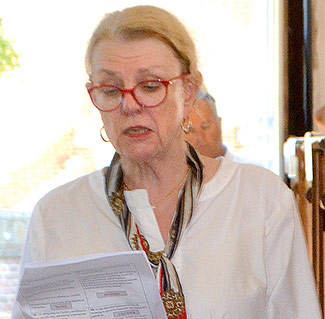 WEEMS—“God Bless America, land that I love” echoed throughout Historic Christ Church as the crowd waved American flags in patriotic pride at a public reading of the Declaration of Independence July 3.

The Foundation for Historic Christ Church and the Cobbs Hall Chapter, National Society Daughters of the American Revolution, organized the celebration in observance of the 242nd anniversary of the Declaration.

The Second Continental Congress declared independence on July 2, a date John Adams called the “most memorable epocha, in the history of America,” and approved the final text of the document on July 4, said Teagle while giving a brief history.

Foundation volunteer Mary Hoerneman was intrigued by the event because the Declaration of Independence is why America celebrates July 4, she said.

“The most meaningful thing to me was hearing the document read from beginning to end because we hear the first couple sentences repeated…but by having it all put together and hearing it in such eloquent language the ideas where the men rested their grievances but also came up with resolutions to deal with it,” said Hoerneman. “Those men loved their country more than themselves which is a concept that has gotten lost.

“I think [the Declaration of Independence] helps me reaffirm the importance of our kind of government and our kind of philosophy of governing,” said Hoerneman. “This is how we should be celebrating the Fourth of July.”

“I had never been to Historic Christ Church so the chance to hear the public reading of the Declaration of Independence motivated me to go,” said Elizabeth Johnson of Deltaville. “It was a joy to be with neighbors across the river celebrating democracy and freedom, especially now, as our nation has drifted toward divisiveness and incivility.”

“The enactors dressed in colonial uniforms, the words of patriotic songs which took flight through the open doors of the church and the infamous declaration so eloquently recited, ‘that we are endowed by our Creator with certain unalienable rights, that among these are life, liberty, and the pursuit of happiness,’ inspired and united all of us,” said Johnson.

Songs of the Revolution era were played by Davis as a prelude and postlude. She also sang the national anthem to begin the event. The congregation joined in singing “My Country ’Tis of Thee” and “America the Beautiful.”

Richard Henry Lee Chapter, Sons of the American Revolution, members Lyman and Belfield, presented the colors and Mitchell led the Pledge of Allegiance.

A trinket of appreciation, a scroll of the Declaration of Independence, was presented to each reader and a pocket size of the document was distributed to all members of the community in attendance.

“We heard from lots of people who really enjoyed it. Very moving and patriotic and the audience enjoyed participating with the songs and flag waving. We plan to make it an annual event,” said Teagle.

“This is really the heart and soul of what the Daughters of the American Revolution is doing in promoting and preserving which is reminding us on a daily basis of how important our flag and our founding fathers were,” said Susan Hudson, publicity coordinator of the Cobbs Hall Chapter, NSDAR.