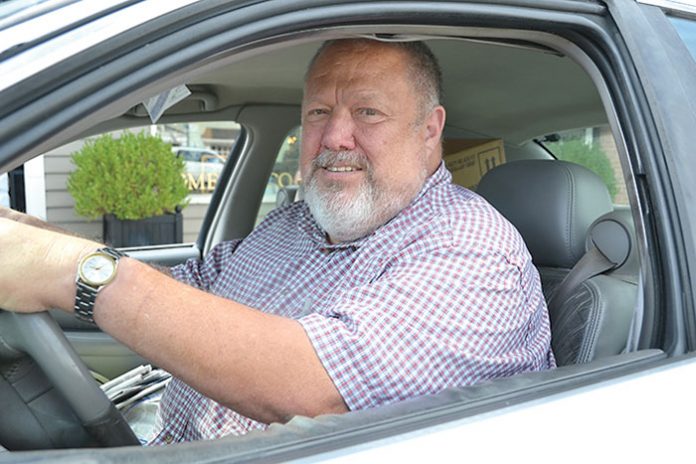 It’s hard to catch up with Dr. Steve Glessner these days. After 30 years of serving area residents in internal medicine as part of Bay Internists in Kilmarnock, he has hit the road to retirement.

But trying to pin him down for an interview was a challenge. Since hanging up his stethoscope, his road trips included Charlottesville’s outdoor amphitheater where he sang religious and pop songs with another retiree, Garrison Keillor and a couple hundred other Lake Wobegon fans.

Did someone say total eclipse of the sun? And he was off again, part of the mass exodus on I-95 to South Carolina for a two-minute blinding event.

Who could miss the annual convention of the Extra-Miler Club, composed of a bunch of people whose hobby is to visit every county in the nation?

“Texas has 254 counties. Delaware has only three, while Rhode Island has five. There are 67 in Florida and Pennsylvania. Alaska has boroughs, not sure how many because they keep creating more, while Virginia has about 140, counting jurisdictions (cities),” he says.

The good doctor estimates he has visited 2,100 counties of the approximate 3,100 in the U.S.

Dr. Glessner is also into pre-colonial Powhatan Indians, an interest that developed in the fifth grade through his teacher and Mattaponi tribe member, Charlotte Lewis. So, naturally, at the 30th annual pow-wow of the Upper Mattaponi Indian Tribe in King William County—there he was watching the drum and dance competitions and the ceremony honoring those who served in the military.

“In the last few weeks, I’ve been doing everything I couldn’t do in the last 40 years,” he said.

Dr. Glessner grew up in Warsaw and earned an undergraduate degree in biology at the College of William and Mary before attending medical school at the University of Virginia. He completed his internship and residency at Portsmouth Naval Hospital, serving as a Battalion Surgeon in the U.S. Navy for 10 years.

He left the service in 1987 and joined Bay Internists and the medical staff at Rappahannock General Hospital.

Because the area does not attract sub-specialists, Dr. Glessner said he dealt with a lot of diseases he ordinarily wouldn’t have seen.

“Seventy percent of patients are on Medicare. Also, we see a lot of aging and end-of-life issues,” he said.

He is not particularly happy with the direction medicine has taken since he began his practice. But while he might not miss the new healthcare system—whatever it may become—he will miss his patients. “I’m friends with a lot of them,” he says.

“Steve is one of my dear friends,” said Jackie Oren P.A., one of Dr. Glessner’s colleagues at Bay Internists and choice for his own health care needs. “It is hard to imagine the world of medicine without him. He is one of the smartest people I know and a gifted diagnostician. His patients loved him because he really cared about them. He always knew everything about his patients and their families. He kept up with his patients as a ‘whole person’ not just a disease or medication list. That is a rarity in today’s healthcare climate. I have learned a lot from him.”

“I am so thankful for having worked with Dr. Glessner,” said Dr. Patricia Monge-Meberg of Bay Internists. “In medical school we were taught that the patient will tell you what’s wrong if you are just willing to take the time to listen. Dr. Glessner modeled that behavior. In a technology driven world, that is so refreshing.”

Should Dr. Glessner stop long enough at his White Stone home, he plans to attack a stack of 200 non-fiction books he’s been anxious to read. And in-between county-hopping, he has volunteered to transport wild animals to the Wildlife Center of Virginia in Waynesboro.

Dr. Glessner proves there is a full life after retirement.