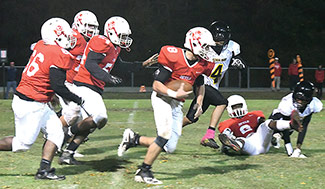 Colonial Beach did all its damage on the ground and scored six touchdowns in the first half last Friday to beat Lancaster, 52-8, in the Red Devils’ final home football game of the season.

Lancaster will end season play November 8 at Northumberland in the annual Bay Bowl. Both the Devils and Indians are looking for their first Northern Neck District win. NHS started strong, picking up four wins to open the season but since have lost five straight and are 4-5 overall and 0-4 in the district. Lancaster is 0-9 overall.

In last Friday’s senior night at LHS, the Drifters gained…