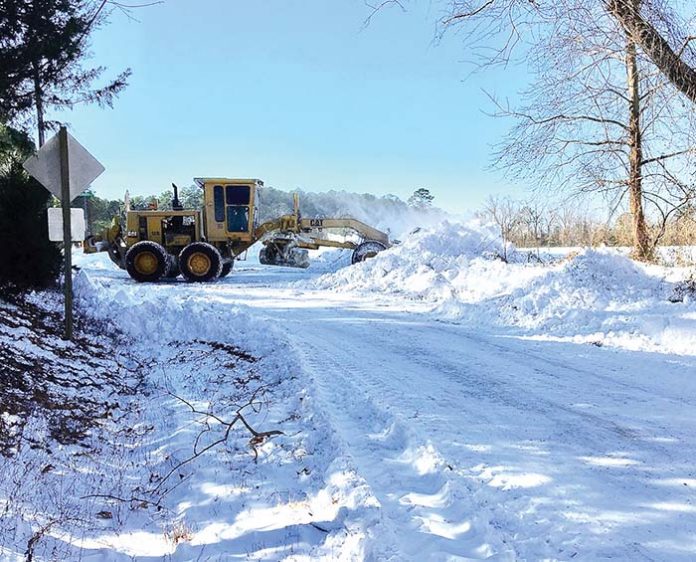 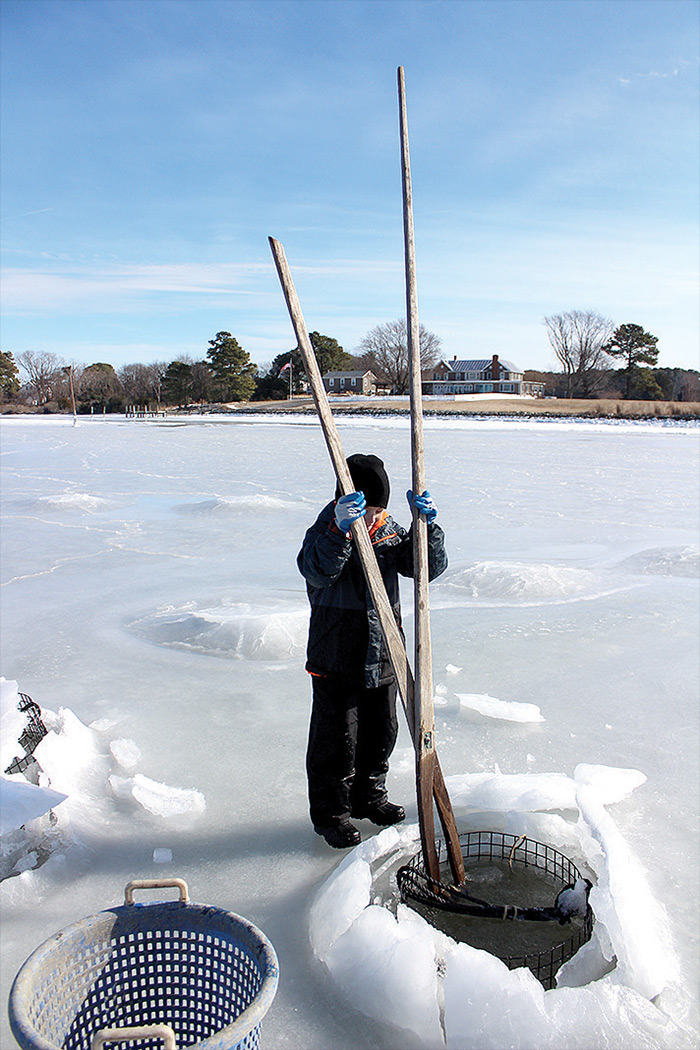 Billy Haynie broke through the ice to retrieve his oyster cages on Cockrells Creek near Fleeton Point Seafood over the weekend. Photo by Erin Haynie

KILMARNOCK—A wave of Arctic air, blowing snow and frost hit the Northern Neck last week on its way from Houston to Boston, creating chaos for those brave souls with the difficult job of trying to keep roads passable.

The intensification of wind and snow was called a winter bomb-cyclone, in which the pressure drops rapidly over a 24-hour period, delivers circular, near hurricane-force winds and also ushers in record-breaking cold.

The first big storm of the year earned a name—Winter Storm Grayson.

According to the National Weather Service, Grayson forced area temperatures to drop to a low of 4 degrees Friday night, the official number registered at the weather station in Saluda, setting a possible record for that date. The Lewisetta weather station registered its lowest reading of 8 degrees early Saturday morning. The station’s proximity to the water is credited for the “warmer” conditions.

Snowfall Wednesday night and Thursday ranged from 5.5 inches in Kilmarnock to 9 inches in Heathsville, and little melting occurred over the four days of frigid temperatures that followed. The winds created drifts that virtually closed roads.

“The worst conditions were near open fields where the wind blew drifts across the road of four to five feet deep. We had to use front-end loaders to dig those areas out,” said Robert Harper, supervisor for the Virginia Department of Transportation in Lancaster.

Harper said there were 26 trucks working in the county, clearing primary roads and secondary roads “over and over again.” Crews worked 12-hour shifts day and night in the single-digit temperatures and high winds, often having to come back and repeat their efforts on the same roads.

“It’s just packed ice,” said Harper, noting the roads were treated with a combination of sand and chemicals. “With the drifting going on, it was a continuous effort. Within hours of clearing roads, the snow was back…and it looked like they hadn’t been cleared. We asked people to be patient with us. It takes time.”

Harper was hopeful that with warmer temperatures this week, all roads would be in good condition for school buses to run by mid-week.

Lancaster County administrator Frank Pleva said he had no reports of wide-spread power outages and that there was no call to open county emergency shelters.

Calls for medical assists did not increase in Lancaster or Northumberland during Mother Nature’s frigid siege. Most people heeded the warnings and stayed home and off the roads.

“Our call volume was about the same as most other weeks…all medical calls would likely have happened whether it was snowing or not,” said Rick McClure, Northumberland County Emergency Services Chief. He noted there were no calls for EMS assists in traffic accidents.

Lancaster County Sheriff Patrick McCranie reported a number of accident and assist calls from drivers who slid off the road, including a snow plow.

“Plows are not immune from the ice,” he said. “There were no reports of injuries. Thursday, conditions were really bad, but it didn’t keep some people off the road.”

Sheriff McCranie noted there were 37 accidents from Thursday through Tuesday morning. “Monday night and Tuesday morning there was a lot of black ice, so it was a good call to keep schools closed for students’ safety,” he said.

Lisa Valdrighi and Madison Franks contributed to this article.