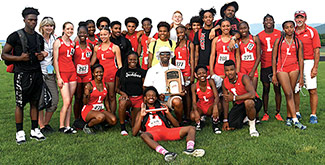 At the start of each sports season, the Rappahannock Record publishes meet-the-team stories as a way of introducing new players. Although the COVID-19 pandemic has canceled the 2020 seasons for high school spring sports in Virginia, the paper would like to recognize those athletes who have already put in several weeks of practice and preparation and were ready to compete.

Lancaster’s boys track team was still riding the wave of excitement generated by a Class 1 state championship in 2019 when the competitors hit the track and field back in early March. Coach Draper Washington and assistants had high hopes for the team of 20, which included five seniors.

“We were trying to fill in the holes we lost from last year and unfortunately, this ended the season too soon for us to determine where everybody was going to fit in,” said Washington.

“Even so, we were pretty excited about the talent we had, especially in our sprint/jump group. They were so athletic,” he said.

Despite coming close a few times in recent history, it had been 34 years since LHS had won the boys state track championship.

“Of course, our goal again was to…[to-view-more]