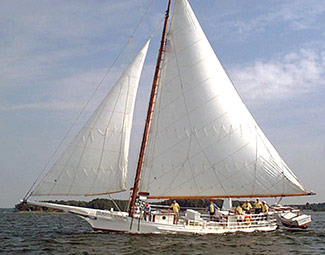 This iconic sailing vessel, named a historic landmark by federal and state authorities, is now berthed at the Reedville Fishermen’s Museum, and back in service with Capt. Gerhard Straub and a crew of four, reported regatta co-founder John McConnico.

The Claud W. Somers will serve as a judging/spectator boat on both race days, reported Tom Wicks. The skipjack had previously participated in the 2016 Turkey Shoot racing against another classic—the Godspeed, a replica of one of the original ships sent to settle Jamestown.

Each year the guests aboard the spectator boat have a traditional role, to enjoy the on-water activities and to select the regatta entry to be awarded the important non-racing trophy, Most Beautiful Boat, based on the boat, sails and boat handling by skipper and crew. The Claud W. Somers is expected to be berthed at the Tides Inn at least for the duration of the regatta and may be available for public visits at other times.

The regatta is open to mono-hulls with a design over 20 years old and there will be two days of racing on the Rappahannock, said Wicks. Tom Chapman and George Bott are co-chairman of the event.

On October 5, the various fleets grouped by ratings will race a traditional triangular course and on October 6, the same entrants will compete in a pursuit race, which allows handicaps to factor in the starting sequence—the slowest starts first.

Register at www.turkeyshoot.org. Early registrations by September 1 will enjoy a discounted entry fee. Professional action photos of the boat and will be made available to the owners.

Events will be open to the public on the grounds of Rappahannock Yachts, 70 Rappahannock Road, Irvington, including happy hour from 5:30-7:30 p.m. October 4.

Meet the sailors and organizers, and enjoy cocktails, dinner and music by Deadrise starting at 5 p.m. on October 5. Winners will be announced following the October 6 race.

This regatta, the largest of the Hospice Regattas in the U.S., is a combined effort of the Rappahannock River Yacht Club, the Yankee Point Racing and Cruising Club, Rappahannock Yachts, the Hospice Support Services of the Northern Neck and Riverside Hospice Agencies along with the greater Irvington community.