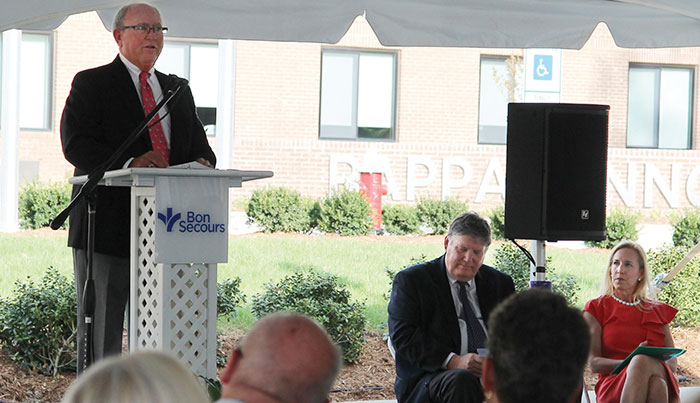 Just a year after groundbreaking, Bon Secours Rappahannock General Hospital on Wednesday, April 13 celebrated Bon Secours Richmond Health Care Foundation board member Craig Kelly, co-chairman of The Campaign for Rappahannock General Hospital, shared that despite rural hospitals across America closing their doors, “tonight we celebrate new doors, more doors, and open doors.” Having reached the $15 million goal a year early, he announced a new goal of $20 million for The Campaign for Rappahannock General Hospital. While the next phase focuses on a major overhaul of the emergency department, the new money raised will go towards updating and expanding the Outpatient Infusion Center, inpatient wing, behavioral health unit and modernizing the entire facility. During the celebration, community members toured the new front entrance and lobby, registration area and café that is expected to open to the public in the coming weeks. Photo by Jackie Nunnery