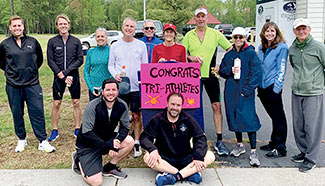 What started as one man’s quest to stay fit during a pandemic winter ended with nine people running across a finish line in Irvington on Sunday, April 25, to complete the first Tri Town Triathlon.

Warren Green of White Stone decided in December to challenge himself to complete an Olympic triathlon sometime in the spring, reported Caroline Wheal. The Olympic tri consists of a roughly one-mile swim, 24-mile bike ride and 6.2-mile run.

As training began, others in a local bike group and on the Stripers swim team took an interest. Suddenly, an individual fitness goal became a group event, said Wheal.

Some wanted to complete the entire event solo; others formed teams….[to-view-more]