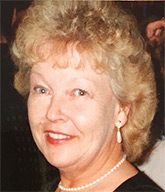 CALLAO—Jane Gough Hayden, 73, of Callao passed away on Friday, May 17, 2019. She was the widow of Stanley Wayne Hayden.

Jane retired as a secretary for the Callao Supermarket. She was a member of Fairfields United Methodist Church in Burgess.

Left behind to cherish her memory are her son, Benton Mannings Hayden of Callao; and her daughter, Mary Max Lewis of Burgess. Jane also leaves behind six grandchildren, Janis Bowdoin, Josh Lewis, Jordan Lewis, Haley Hayden, Trent Hayden and Calli Hayden; and one great-granddaughter, Sutherlynn Bowdoin. Her grandchildren were her pride and joy.

She was predeceased by her parents, Vernon McNeal Gough and Frances Marion Thrift Gough; and her brothers, Clarence Gough and Mac Gough.

Jane’s funeral was held at 2 p.m. Tuesday, May 21, at Henderson United Methodist Church in Callao. Rev. Han Li officiated. The family received friends at the church one hour prior to her service. Burial followed in the Henderson UMC cemetery.

In lieu of flowers the family asks that you honor your memories of Jane by making a donation in her name to the charity of your choice.