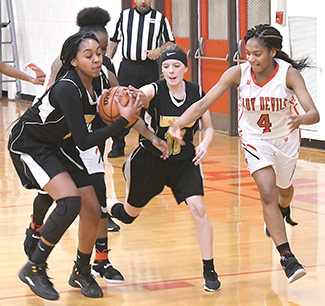 Laila Waters and Aniyah Brown each contributed four points and Abria Jackson and Raeghan Franklin each added a three-pointer in the first quarter as the Lady Devils tallied the equivalent of Colonial Beach’s scoring for the entire game. LHS opened with a 14-6 run then outscored the Lady Drifters, 19-0, in the second quarter and 16-2 in the third to take a 49-8 lead in the fourth.

Whitney Wolf scored nine points and Makaila Veney seven in the first half to lead W&L. Wolf, Veney and Devonna Fisher finished with 11 points each and Megan Smith scored 10.

Jackson and Henderson finished with eight each to lead Lancaster.

In JV action, Lancaster improved to 13-1 last week after picking up wins over Washington & Lee and Colonial Beach.

The Lady Devils beat the Lady Drifters, 28-23, last Friday behind an eight-point effort by A’Nijah Ball.

Lancaster rode a 13-8 halftime lead to the final after trading shots with CB for an even 15-15 second half.

Ball did the bulk of the work for LHS last Tuesday in a 34-23 win over Washington & Lee. Ball finished with 20 points for Lancaster, including eight of her team’s 12 in the third quarter when the Lady Devils outscored the Lady Eagles by six to open up a one point halftime lead.