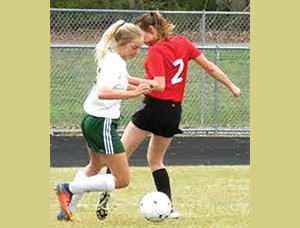 The Lady Indians shut out Class 2A Arcadia, 5-0, last Friday to remain unbeaten in varsity soccer with a record of 8-0-1.

Northumberland opened the scoring early with a goal by Cameron Lewis on an assist by Alice Sisson six minutes into the game. Hannah Loving took a pass from Tahi Wiggins into the net just a minute later and Lewis scored her second to lift NHS, 3-0, with less than 10 minutes off the game clock. Wiggins had the assist on Lewis’ second goal and finished with three assists for the night.

At the 20-minute mark, Trinity Taylor won a one-on-one with Arcadia keeper Reina Watanabe. Taylor came down the right wing to pull Watanabe out of the goal and slipped the shot by her from 17 yards out to give NHS a 4-0 lead at the half.

Lewis turned in a hat trick, scoring her third goal and her 13th of the season 15 minutes into the second half. Erin Burgess had the assist.