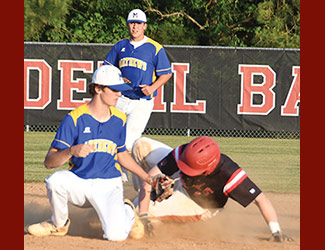 Lancaster made some key defensive plays to keep Mathews from scoring and used some heads-up base running, walks and timely hits to advance to the semifinals of the Region A baseball tournament.

The host Red Devils scored the winning run in the bottom of the fifth and went on to beat Mathews, 4-0, and eliminate the Blue Devils from postseason play.

As a high seed, Lancaster had drawn a first round bye in the Region A tournament then got by Mathews in the quarterfinals to earn a shot at Essex in the semifinal. Essex was a 10-3 winner over Surry in another quarterfinal. Colonial Beach, a 5-0 winner over Windsor, and West Point, an 8-6 winner over Washington & Lee, played in the other semifinal. The winners will meet in the Region A championship tonight, May 30, at the higher seed. Both will advance…