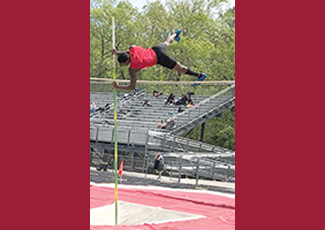 Class 3 Tabb won the meet with 91.5 points. Class 5 Bethel was the runner-up with 91, Class 4 Churchland was third with 89.5 points and Class 4 Gloucester High School was fourth with 78 points. Lancaster finished with 66 points.

The Red Devils 4X400-meter relay team of Veney, Marcus Keeve, De’Avion Harding and Chris Dameron also won that race with a time of 3:31.73.

Lancaster had several others place in the top 10 including it’s 4X100-meter relay team of Cameron Towles, Elijah Palmer, Lee and Dameron finish seventh, 45:92.

In the girls meet, Lancaster produced one gold medalist in distance runner Hailey Smith, who won the 3200-meter run in 12:28.88. Teammate Chyra Boyd was seventh in that race in 15:13.40.

Smith also finished fourth in the 800-meter run in 2:28.62 and Nealasia Redmond had two top five finishes in field events for LHS. Redmond cleared 4’4” for fifth in the high jump and went 31’3” for fourth place in the triple jump. Teammate Laila Waters went 30’ for sixth in the triple jump. Waters also placed ninth in the long jump, 14’4.5”.

Lancaster’s Shawnicey Veney cleared 4’2” to tie for sixth in the high jump and LHS sprinter Keyandre Brown had a seventh place finish in the 100 meter dash in 14.87.