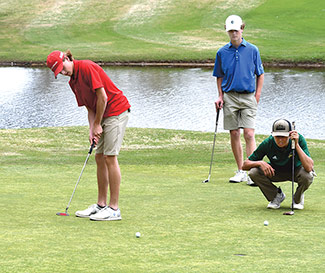 The Chargers finished with a 381 and sent its entire team to the Virginia High School League Class 1/2 tournament April 19 at Virginia Tech’s Pete Dye River Course. The top region team and top three individuals not on that team qualified for the state championship match.

Lambert shot a 40 on the front nine and a 41 on the back to edge runner-up Ben Pittman of Lancaster by….