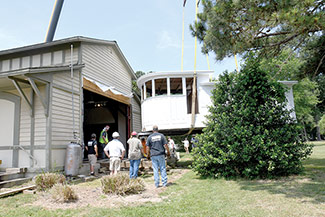 IRVINGTON—The long-awaited placement of the pilothouse from the steamer Potomac in the Steamboat Era Museum in Irvington finally took place last Wednesday.

The pilothouse made its final journey from Heathsville, where it was restored by John Morganthaler, to its home as a permanent exhibit at the museum. More than 100 spectators watched as the 10,000-pound structure was lifted by a 155-ton crane from a track in the museum’s parking lot and carried over the museum’s roof and carefully threaded into an opening cut in the rear wall of the building.

According to museum director Barbara Brecher, Reebals Crane Rental of Charles City made the move possible.

“While the majority of the restoration is finished…