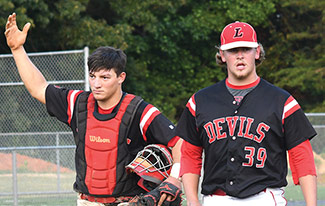 Lancaster made winning look easy last week. And this deep into the postseason, that’s typically not the case.

Behind a dominant pitching performance by senior right-hander Matthew Kleinfelter, the Red Devils shut out visiting William Campbell, 5-0, in a Class 1 baseball quarterfinal to advance to the state tournament semifinals this week in Pulaski County.

Lancaster was scheduled to play Patrick Henry-Glade Spring Friday in the semifinals but because of storms in the western part of the state, the game was postponed until today, June 13. A win in today’s outing would advance Lancaster to the state championship game at 9 a.m. tomorrow, June 14, at Calfee Park.

The Devils were last in the state final in 2016, when they finished as the Group 1A runner-up to William Campbell.

“Last week’s game was a great game with a great atmosphere,” said LHS coach Welby Saunders. “Matthew continues to dominate on the mound…