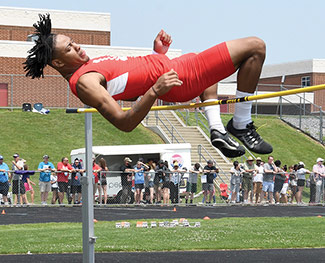 Photo and story by Lisa Hinton-Valdrighi

Lancaster High School is the best in the state.

It’s been 34 years since the LHS boys track team could make that statement.

But with 70.5 points, two winning relay teams and an individual gold medalist, the Red Devils claimed the Class 1 state championship in track and field Saturday, June 1, at East Rockingham High School. It was Lancaster’s first state team championship in boys track since 1985.

The track team without a track showed everybody in the state who was boss last weekend, scoring in 10 of 15 events to outscore 35 teams and win the boys meet. The Lady Devils also had their best showing in state competition in 11 years, scoring in eight events to place fourth among 29 teams. It was the best finish for an LHS girls track team since it placed third in 2008.

And they did all that without a home track. That’s right, for those not in the know, LHS hasn’t hosted a track and field meet since 2005. All-weather tracks are now the norm and Lancaster’s dirt and crush-and-run gravel track is outdated. The teams practice on it but don’t hold home meets.

“I’m beyond proud of these kids and what they’ve accomplished,” said LHS boys coach Draper Washington. “I knew when…