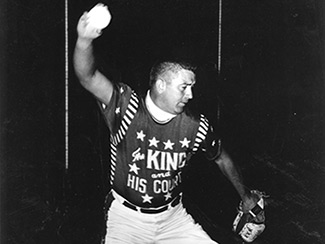 During their 15-year run, the Texacos faced all types of competition, from prison squads and girls teams to nationally ranked clubs, but the most unusual foes were the barnstorming teams. And they were the most fun games.

These teams included The King & His Court, California Cuties, Philadelphia Hobos and The Queen & Her Maids.

Of that group, The King & His Court was the most popular and the most well known. The four-man fast-pitch softball team was led by “The King” Eddie Feigner, who is the undisputed best pitcher in the world. Organized in 1946 in Walla Walla, Wash., the team played in almost every country…