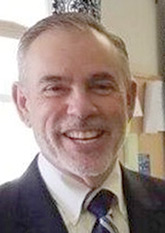 The Rev. James Lee “Jim” Moseley will begin his pastorate Sunday, May 20, at Campbell Memorial Presbyterian Church, 3712 Weems Road, Weems, in response to a unanimous call from the congregation on March 25.

He and his wife, Susan, moved last week to Brightwaters from Wilmington, Del., where he served 14 years as executive presbyter for the New Castle Presbytery.

In addition to his presbytery work, Rev. Moseley has served as pastor of Presbyterian churches in Ferguson, Mo., and Charlotte; as associate pastor for mission in Joplin, Mo.; with youth in Tampa, Fla., and as camp director in Virginia. He graduated from the University of South Florida. He earned a master’s in Christian education at the Presbyterian School of Christian Education in Richmond, and a master of divinity at Louisville Presbyterian Theological Seminary.

He and his sister Jane Moseley Vogel, who with her husband, Matt, is a long-time member of Campbell, grew up in Cocoa Beach in the fledgling days of Florida’s space industry, in which their father was involved. The ingenuity and determination of the young men and women in that pioneering environment made a lasting impact on Rev. Moseley.

“When it was announced that the USA was going to land a man on the moon, we didn’t have the technology,” he said. “We were making it up as we went along. The call went out for young gifted thinkers and the average age of that engineering community was 26  years old. We succeeded in the first attempt, when no one thought we could. It was just shy of a miracle. To dream or imagine doing things that seem impossible is the way the human spirit thrives.”

He points to the vows of ordination in the Presbyterian church: to serve with energy, intelligence, imagination and love.

“That imagination piece comes from a different place in our brains. I believe it comes out of the Holy Spirit and opens us to imaginative thinking and hope,” he said. “If a church is going to do well, it is not because we have hammered out our polity; it has to be the spirit. It has to have a deeper meaning. That’s what we have to explore.”

Campbell invites the community to hear and welcome Rev. Moseley at 9 and 11 a.m. services. A fellowship period follows each service, with Sunday School in between.