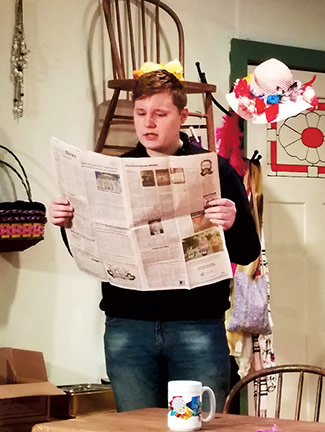 A new face will be appearing on the Lancaster Players stage this month as it presents “Opal’s Million Dollar Duck.”

Jackson Stamm, a Northern Neck native who lives in Irvington, is portraying Desmond Doolittle Derwent, one of the stars of the theater company in Opal’s hometown.

What makes Stamm unusual for the Players is that he’s still in high school.

“I started appearing in church plays when I was very young, but I wanted more challenging opportunities,” said Stamm. That desire led him, at the age of 8, to the Missoula Summer Theatre Camp program where he spent several years learning and performing.

“But as I got older, I realized that the camp catered more to smaller kids,” he said. “My mom was working in Williamsburg then, so I attended middle school there because… [to-view-more]