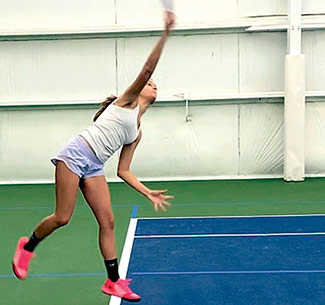 Racquet sports director George Christoforatos is a former high school coach from Fredericksburg, where he coached James Monroe boys tennis for 13 years.  James Monroe won every district title, and eight regional titles, and competed in every state championship in either team, singles or doubles events.

He and his wife, Brenda, moved to the Northern Neck, coming back home to Brenda’s stomping grounds. Her father, Jimmie Jackson, and sisters Lynnie McCrobie and Becky Marsh live in Kilmarnock.

Christoforatos is a USTA High Performance Coach and National Faculty Coach. This program involves a lot of specialized training—from diet, physical training, mental training, tennis technique training and tactical training. But mostly, it gives a tennis professional the pathway to grow a tennis player into a college level player or more, depending on the athlete. Every year, each coach has to continue his education path as a USTA High Performance Coach. Those who are selected are recommended by USTA National or Regional coaches.

The first thing Christoforatos recognized, once moving here, is there are no high school tennis programs in the nearby public school systems, he said. Christoforatos has reached out to all the local high schools, leaving messages to the athletic directors. A few have contacted him back and are very interested in adding tennis from ages 5 and older in the area, he said.

Ava Dalton, of Richmond and Weems, started working out at the club, and has blossomed into a wonderful player with college aspirations, said Christoforatos.

Dalton, coming in the door, needed to revamp her forehand—mostly the loading position and driving her body through the ball—and needed to incorporate her legs into her serve, with a couple of changes to her grip, he said.

She now has weapons in her game to hurt her opponents and take over matches, continued Christoforatos. Dalton plays for St. Catherine’s and had a record 11-1 in a COVID-19 shortened season.

Her mom, Maurcine Dalton, saw big improvements in her daughter’s game and decided to set up a schedule with Christoforatos and ICYCC, in lieu of going to Chris Evert Tennis Academy for the summer. The family joined ICYCC, so that Ava can train on a regular basis and she is now visiting colleges that are recruiting her.

ICYCC is the place to grow players—the numbers of young players in training is growing, and the goal is to be the best venue for youth and adult programs in the Mid-Atlantic Section and the U.S., said Christoforatos.

In addition to 10-and-younger and middle school/high school programs and lessons, the youth program will include camps and—someday soon—will have a high-performance program geared for college/pro potential players, he said.

Even during  a COVID-19 year, facilities have been enhanced as the program has evolved.

He urges families to visit ICYCC, 362 Club Drive, Kilmarnock, to tour the facilities, meet the pro and get children involved in the new and exciting youth programs.