Excerpts taken from the April 24, 1980 edition of the Rappahannock Record

The Cub Scouts of the Northern Neck District held their first annual district Pinewood Derby Saturday, April 19, at Lancaster Intermediate School in Kilmarnock. The Pinewood Derby has blocks of wood about 6″x2″ and the boys with the help of their parents, carve the block of wood into a car. The car is then raced down a thirty foot track.

The district would like to thank Pack 242, McDonald’s in Tappahannock and the Lancaster School Board for their assistance and support of the district race.

The Northern Neck has a total of 18 Cub Scout Packs, Boy Scout Troops and Explorer Posts serving the youth in the four Northern Neck counties of Lancaster, Richmond, Northumberland and Westmoreland. 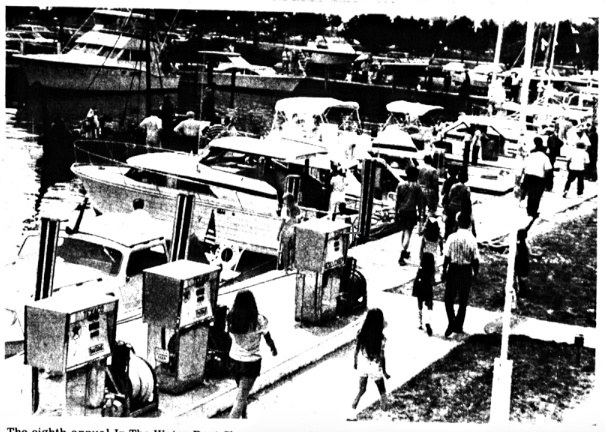 With the addition of recent dealer registrations, the eighth annual In-the-Water Boat Show at Windmill Point Marina April 26-27 will be even larger than anticipated by its sponsors. A spokesman for the Windmill Point Yacht Club, sponsor of the show, said that interest in the 1980 event has been so great that many boat dealers in Virginia have submitted last-minute registrations and will be joining the numerous other Maryland and Virginia dealers who will be displaying latest models of sail and power boats.

Of special interest to local watermen will be the new fiberglass work boats, including the 36′ entry from Chesapeake Work Boat Company, Hayes, and the 26′ Deltaville Gravery fiberglass work boat. Bobby Jones Marina will be featuring the Privateer Sea-Ox models from Jett’s Marina and C-Hawks from Haywood’s Dock will also be on display.

Each selection by participating dealers has been made to accommodate the needs and interests of area residents. Boats, sail and power, of all sizes with a variety of standard and optional features, will be displayed in the water and on land. The layout of the show is such that all visitors will be able to thoroughly inspect each show entry and have an opportunity to talk with dealers about the most recent developments in boats and marine equipment…….