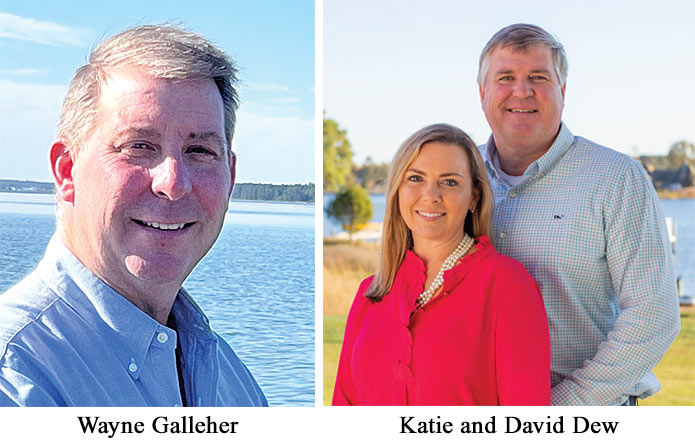 The Lancaster by the Bay Chamber of Commerce recently announced the selection of  as its 2022 Businesspeople of the Year and Wayne Galleher as its 2022 Chamber Volunteer of the Year.

The awards will be presented at the Chamber’s annual meeting and dinner April 16 at Indian Creek Yacht and Country Club.

Businesspeople of the Year

“David and Katie Dew received an overwhelming number of nominations by their peers for 2022 Businesspeople of the Year,” said executive director Sydney Moss Walters. “The nominations for David and Katie spoke highly of their business, tourism and community accomplishments through Isabell K. Horsley Real Estate.”

Under their leadership, Isabell K. Horsley Real Estate has four offices and over 30 real estate agents throughout the Northern Neck and Middle Peninsula. Horsley agents describe the Dews as “hardworking, generous, family-oriented and compassionate professionals who work tirelessly to enhance our community.”

In 2022, Katie was named principal broker, continuing the legacy of her late grandmother, Isabell Horsley. David serves as managing broker and the two of them work in guiding the business. They were both awarded the Top Realtor Award and the Team Diamond Award for the Northern Neck Association of Realtors in 2022.

They are huge supporters and volunteers for Chesapeake Academy, Lancaster County Public Schools, Northern Neck Association of Realtors, Lancaster by the Bay Chamber of Commerce and White Stone Business Association. They live in White Stone with their children, Leyton and Izzy.

Volunteer of the Year

“Wayne Galleher is the perfect choice for 2022 Chamber Volunteer of the Year,” said Walters.

He has been a member of the board of directors for five years. Galleher has served as co-chairman of the annual Chamber Golf Classic since 2018. His leadership and contributions as co-chairman have helped to make the golf classic the second highest fundraising event for the Chamber.

Most recently, Galleher joined the Taste by the Bay core committee where he led beer sales and enlisted the help of many others to volunteer for the event.

“Wayne is the perfect example of a strong Chamber advocate. He’s present at our events and within the community, and he’s the first one to step up to speak on behalf of the Chamber or to recruit new members. He truly loves the Chamber and the community,” said Walters.

Galleher is the operations manager of NWP Energy. He lives in Weems with his wife, Wendy, and son, Braxton.

Tickets for the annual meeting and dinner are $70 each and can be purchased at www.lancasterva.com. Contact Walters at the Chamber office if interested in event sponsorships.