IRVINGTON—Edwin Jay Smith, formerly of McLean/Great Falls, having retired to the Northern Neck in 1998, passed away at Rappahannock Westminster-Canterbury on October 18, 2020.

He was preceded in death by his loving wife of 70 years, Zena Smith; and son, Edwin Jay Jr.

He is survived by sons, Gary, Christopher, Timothy, Robert and Joseph; and daughter, Nancy; as well as 36 grandchildren; and 33 great-grandchildren. 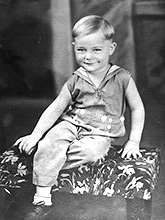 in O’Fallon, Illinois. He moved to Washington, D.C. at 12 years old and graduated from Eastern Senior High School, Class of 1948. He was a notable football and track athlete in high school and played semi-pro football, also serving in the Army National Guard.

Ed and Zena were married in Washington, D.C., on September 12, 1948. Together they founded E. Jay Smith Builders which, by the early 1960s, became one of the D.C. area’s most prestigious builders and home renovation specialists. Noted projects include the restoration of the United States Capitol Building, conversion of the Naval Observatory into the official Residence of the Vice President, the renovation of Hickory Hill, home of Senator and Mrs. Robert F. Kennedy, the construction of the McLean residence of Senator and Mrs. Ted Kennedy, as well as the McLean residence of Governor/Senator and Mrs. Charles Robb.

Ed was a gifted architect and in retirement oversaw the design and construction of the White Stone Church of the Nazarene, of which he and Zena were devoted members. Together they created an oasis at their Bay House, on Bayberry Island, where they graciously entertained family and friends, treating them to the natural beauty and wonder of the Chesapeake Bay.

Ed and Zena lived a full and active life with unwavering faith in Christ and in the promise of the resurrection. He leaves behind a legacy of love, loyalty, service, talent, creativity and mischievous humor that will be cherished for generations. Though his passing will be mourned deeply by all those blessed by his endearing nature, it is made sweet by the sure hope of a joyous reunion.