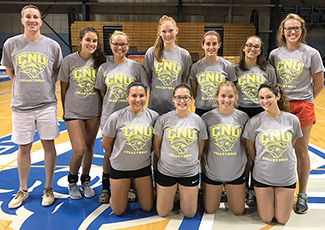 “This was a great opportunity to be able to play lots of different schools that we wouldn’t see during the season,” said Walters.

Lancaster was the smallest school division and only Class 1 school represented.

Along with individual position instruction and question-and-answer sessions with the CNU players, there was pool play on the first two days of the camp and tournament playoffs on the third day.