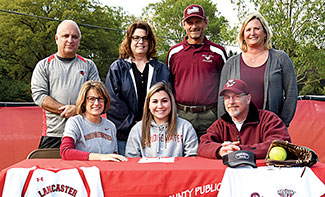 Riley Molineaux was sold on Bridgewater College after one visit.

The Lancaster High School senior said the only thing lacking in the tiny mountainous town of Bridgewater was the water. Otherwise, “it felt like home, felt like being in the Northern Neck. It was a small town and when I got on campus, everybody talked to me like they already knew me.”

Molineaux will take her softball talent to the Division III private college next fall and signed a letter of commitment to play for the Eagles this week on Lancaster High’s home field at Dream Fields in Kilmarnock. She was joined by her family, Lancaster coaches and her travel team coaches.

Although she had been accepted at the University of Alabama and was contemplating following in her father’s footsteps as a Hokie at Virginia Tech, she ultimately wanted to play softball…