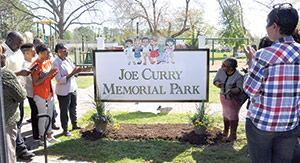 Until last weekend, the playground didn’t have a name, said mayor Mae Umphlett. It was simply known as the playground on Waverly or the playground behind Lee’s Restaurant. She suggested after Curry’s passing in September 2017 to name the playground in Curry’s memory, a suggestion that was unanimously supported by town council.

“It became clear to me that I, as mayor, and the council had not properly acknowledged all that Joe meant to this community, how hard he fought for the less fortunate among us and how generous he was with his time and talents,” said Umphlett during the dedication ceremony…