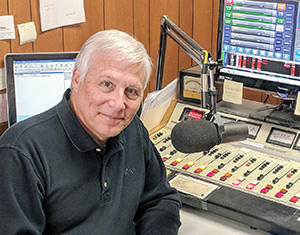 For the past 35 years, fans of southern gospel music in the Northern Neck have tuned in to Reggie Brann.

In 1983, Brann ventured into the world of broadcast radio when he began a Southern gospel program on WNNT.

“I started a daily program and it ran five days a week. I pre-recorded it and it was on the air for 10 and a half years, from April of 1983 to the end of October in 1993,” said Brann. “It was a taste of Southern gospel music on the country station.”

Brann became interested in this genre of music as a teenager when he heard the Blackwood Brothers and the Statesman Quartet at Constitution Hall in Washington, D.C.

At 16, when most people got a car, Brann received a public address system and formed a southern gospel group, Gospel Vibrations. Later in 1984, he formed Reggie & Friends. His group included his wife, Sharon, Al and Crystal Diehl and Tony and Susan Hudson. Thomas Suthard joined the group as a bass singer and bass guitar player.

“Our son, Matthew, joined us as our drummer at 9 years old. You really have not been blessed until you have a 9-year-old drummer in your home,” said Brann.

“Reggie & Friends recorded two albums in 1986 and 1990 and did a lot of singing for a number of years. We opened for a lot of groups, especially at the concerts I promoted at Kirkland Grove Camp near Heathsville and my home church, Gibeon Baptist,” he said…