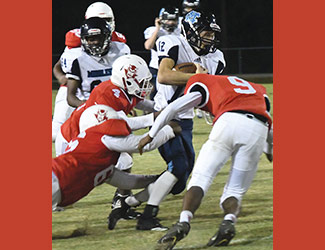 Middlesex shut down Lancaster last Friday in varsity football, holding the host Red Devils out of the end zone and to only 149 yards total offense for a 35-0 non-district win.

The loss drops LHS to 0-3 with the Devils traveling to the Eastern Shore tomorrow, September 27, to play Nandua. Lancaster has been held to two touchdowns in three games.

Middlesex gained 240 total yards with 196 coming on the ground on 45 carries. The Chargers more than doubled Lancaster’s ground gain with LHS getting 91 yards on 22 rushes. With the running game stifled, Lancaster quarterback Calvin Redmond went to the air for 13 pass attempts. He connected on six for 58 yards including one to Xavier Sutton for 43 yards before Sutton came out of the game with an injury in the second quarter. He didn’t return.

Troy Cox Jr. led the LHS rushers with 16 carries for 66 yards and Cameron Towles had three totes for 22 yards.

Adam Smith accounted for the bulk of the Middlesex offense, amassing 154 yards and scoring four times on 29 carries.

Lancaster had three turnovers including two interceptions and a fumble and two of which led to MHS scores, including a Redmond pass intended for Jaiquawn Smith in the first quarter that turned into a pick 6 by Matt Hart.

An A. Smith 8-yard run for a score gave Middlesex a 14-0 lead after one and another A. Smith 5-yard carry in the second quarter put the Chargers up 21-0 at the half.

Smith scored his third TD on a 4-yard carry in the third to put MHS up 28-0 and the Chargers were threatening again when they fumbled at the LHS 16 yard line. Lancaster went 4-and-out then held MHS again before fumbling the ball over to the Chargers in the red zone on a series of sloppy play for both sides. The LHS fumble resulted in A. Smith’s fourth TD carry of the night, a 5-yard run with four minutes to play.

Hart carried 13 times for 34 yards for MHS. Wyatt Brown had one reception for 24 yards. A. Smith one for 20 yards.

Cameron Towles, Daniel Smith and J. Smith led the LHS defense with seven tackles each and Landon Norwood had five take-downs, including three for losses, for the Chargers.