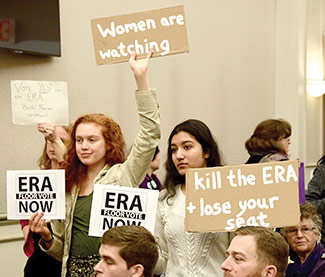 RICHMOND—Brandishing signs that read “Women Are Watching,” “Kill the ERA + lose your seat,” and “Men for Equality,” over 150 women and men crowded into a House committee room Tuesday morning to show their support for the ratification of the Equal Rights Amendment in Virginia.

“The equality between men and women is a core fundamental American value that I hope we can all agree on. We are here because the courts currently treat gendered discrimination more leniently than discrimination based upon race, national origin and religion,” said Del. Jennifer Carroll Foy of Woodbridge, co-patron of one of the resolutions before the House to ratify the Equal Rights Amendment (ERA). “The equality of 160 million women and children are dependent upon what you do or do not do here during this legislative session.”

The Democrats on the subcommittee that supported…