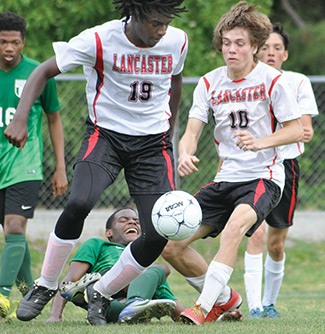 Lancaster was poised to compete for the Northern Neck District tournament boys soccer title when three days of rain put an end to the Red Devils’ hopes of bringing home the trophy.

Second-place Lancaster edged fourth-place Northumberland, 2-1, in a district tournament semifinal at LHS last Wednesday for a berth in Friday’s final at Rappahannock. However, rain, which began Wednesday night and ended late Saturday, forced the district powers-that-be to cancel the remainder of the tournament. Region A play was scheduled to begin May 23 at the higher seeds with Lancaster hosting Surry in a first round game.

“We were told not to take it personally but we are,” said LHS coach Rob Pittman. “This was disappointing because the boys had worked hard for this all season and were excited for the opportunity to prove themselves…