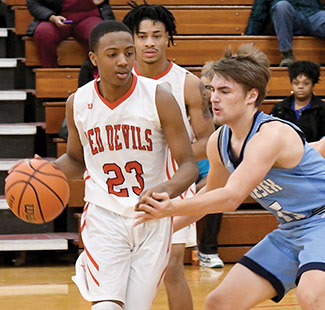 Lancaster built an early lead to a 51-45 win over Essex in Tappahannock last Friday in varsity boys basketball.

The Red Devils are now 9-4 overall.

Lancaster drilled three three-pointers in the first quarter including two from Jason Curry and one from Gerrell Moody to take a 14-7 lead. The two teams traded shots for 11 points each in the second quarter as Lancaster held on to a 25-18 lead at the half.

BJ Lee scored six of Lancaster’s eight points in a low-scoring third quarter for the Devils while KJ Dameron scored four points to lead Essex in a 12-point third that cut Lancaster’s lead to three-points, 33-30, heading into the fourth.

Lee did most of the work for LHS in the final…