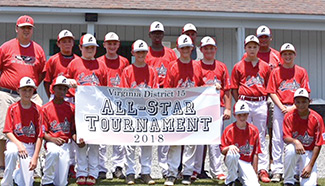 Spotsylvania American proved to be the stumbling block for Lancaster County Little League’s Major Baseball All Stars two weeks ago in the District 15 tournament.

Spotsylvania National won the championship with back-to-back wins over Caroline, 3-2 and 12-7.

Spotsylvania American edged Lancaster, 3-1, in the opening round. Kelvin Davis and Spencer Camarrata pitched in the opening game for Lancaster and Stewart Hollingsworth and DJ Zeiler led at the plate.

Lancaster dropped into the one-loss bracket, where it picked up three wins. Lancaster shut out Essex, 10-0, got by King William, 3-2, and beat Middlesex, 7-3, before facing Spotsylvania American a second time when the Spotsylvania team defeated Lancaster, 3-0, to knock Lancaster out of the tournament.

Ben Pittman dominated on the pitcher’s mound in the win over King William. He pitched five innings with Monroe closing. Camarrata had a key hit and run scored with Josh Woolard recording a hit and T. Davis RBIs.

K. Davis, T. Davis and Camarrata all pitched in the win against Middlesex and Creston Saunders hit a grand slam to break the game open in the third.

Zeiler and Monroe pitched in Lancaster’s second game against Spotsylvania American. Pearson Long and Pittman led Lancaster at the plate.