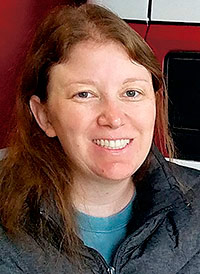 RCC graduates form the backbone of the regional economy—healthcare providers, bankers, lawyers, small business owners and trades people. It’s hard to go through a day without being served by an RCC alum in some way.

It isn’t surprising that Heather Brown became an emergency medical technician (EMT). Her parents were EMTs and her maternal grandmother was the first EMT in Gloucester County almost 50 years ago.

Her journey at RCC is a bit different from others as she already had a bachelor’s and a master’s before enrolling in RCC’s EMS program.

“Self-motivation is required in the paramedic program. There is a lot of work you have to do on your own,” said Brown. “I was working two jobs, volunteering and spending time with family while…