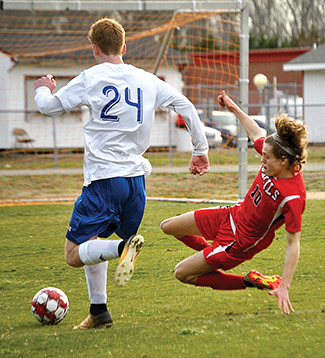 Middlesex scored a goal in the second half to break a halftime tie and shut down Lancaster’s offense for a 2-1 win on March 18.

Henry Smith, who led LHS with nine shots, scored on an assist from Lex Casseday to lift Lancaster 1-0 early in the first half. Middlesex scored with 10 minutes remaining for a 1-1 tie at the half.

Casseday and Kiran Bhattarai had one shot each for LHS.

“On paper, we’re down 22-1 right now,” which includes a scrimmage loss to New Kent, said LHS coach Rob Pittman. “So you’d think it’s a terrible defense. But it’s not. Our offense just isn’t taking the shots…