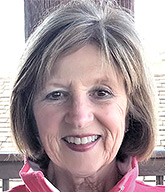 WEEMS—Rennie Rogers Dutton of Weems died unexpectedly on March 2, 2019. Rennie was born on October 29, 1947, in Alexandria and was 71 years old.

As a child, in Fairfax, she went every weekend to “the farm,” where she learned to love horses, rode, helped with the work, and eventually taught her skills to others. Rennie competed with her horse in shows and fox hunts with enough success to fill her mother’s basement with ribbons, silver cups and trophies.

Early in her career she worked for Northwest Airlines, where once she was assigned to meet and escort a pushy, corporate VIP. Rennie shook his hand and introduced herself as “Miss Lassiter,”  her maiden name. He smiled, and said, “And what can I call you?” To which she looked him in the eye and with a smile said, “Miss Lassiter.” He reported her for that.

In 1989, she earned a Ph.D. in counseling and consultation from the University of Maryland, with an emphasis on statistics. She made a life choice to have a career rather than children and never looked back. Rennie took her education, work and life seriously, with a style that did not suffer fools gladly. She taught women studies at the university and believed strongly in women’s equality and rights. Her refusal to follow management instructions to make false statements cost her a job, and later in another situation, almost a key employee.

Rennie joined the Points of Light Foundation in 1992, the organization founded by President George H.W. Bush to promote volunteering in America and quickly became special assistant to the president and vice president of Foundation Relations, Research and Evaluation. She raised more than $13 million for the organization from the nation’s major foundations.

In 1998 she fell in love and married John Dutton, and they bought a home in Mathews County. Both continued to work at the Points of Light Foundation in Washington, D.C. In 2015, they purchased the historic Corotoman property in Weems, and spent the last four years tearing down a dilapidated garage-apartment and house and worked together on building new ones.

Her life passion was caring for animals, especially dogs and horses. She was mom to a series of beloved Scottish terriers, including the two who survive her, Ailee and Piper. She served on the boards of the Gloucester-Mathews Humane society and the Northern Neck Partners for Pets.

Rennie is loved and is survived by her husband, John; as well as by her sister Ellen Rogers Davidson and her husband, Tom Davidson, of King William; first cousin, Nancy Skipper, and other cousins, John Gay and Jeff Davis. Service arrangements are pending.