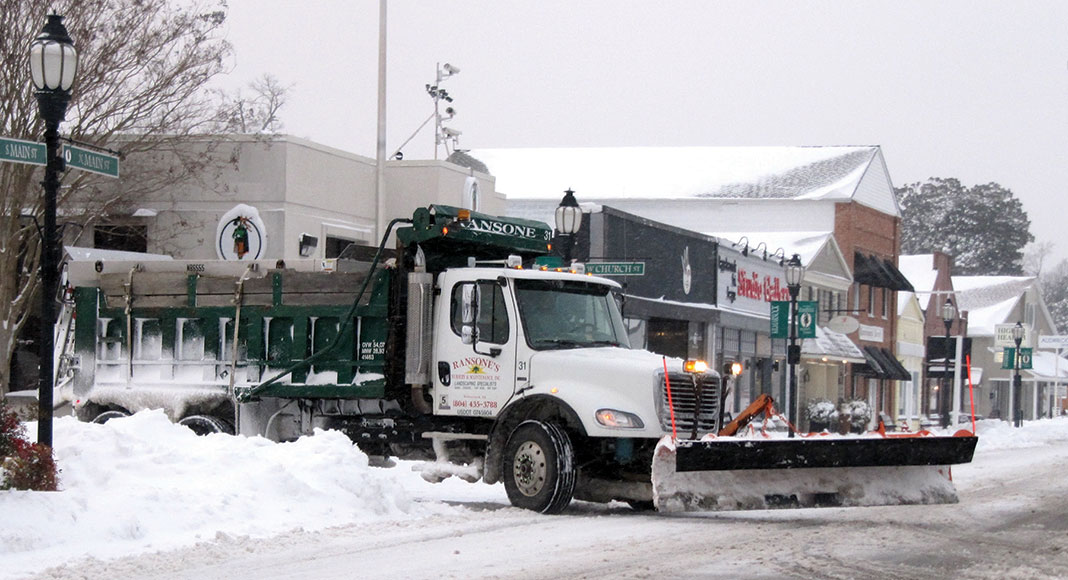 On Saturday morning, VDOT reported that crews worked overnight to plow roads and apply sand and salt to reduce icing and improve traction, and would continue working through the storm in 12-hour shifts, 24 hours a day, until all roads were safe for travel. Once 2 inches of snow accumulated on the road surface, plowing began. Above, crews are busy treating and clearing primary and major secondary routes in and around Kilmarnock on Saturday. As evening approached, they returned to treat previously plowed roads, ramps and bridges for re-freezing. More than 10 inches of snow accumulated in the Northern Neck and Middle Peninsula areas. The goal was to make all roads passable 48 hours after the storm’s end. Passable, defined by VDOT, is an 8-foot to 10-foot path, drivable with caution (the road will not necessarily be cleared curb-to-curb, or have bare pavement). Progress continued through Sunday despite below freezing temperatures. On Monday afternoon, VDOT reported crews were working in the Northern Neck and Middle Peninsula to make all secondary roads passable. Warmer temperatures on Tuesday and rain early Wednesday helped melt packed-down areas of snow, and temperatures in the 60s were predicted for Thursday. The storm shut down most activities for several days, including Sunday church services. Schools were closed Monday, Tuesday and Wednesday.
Photo by Robert Mason Jr.