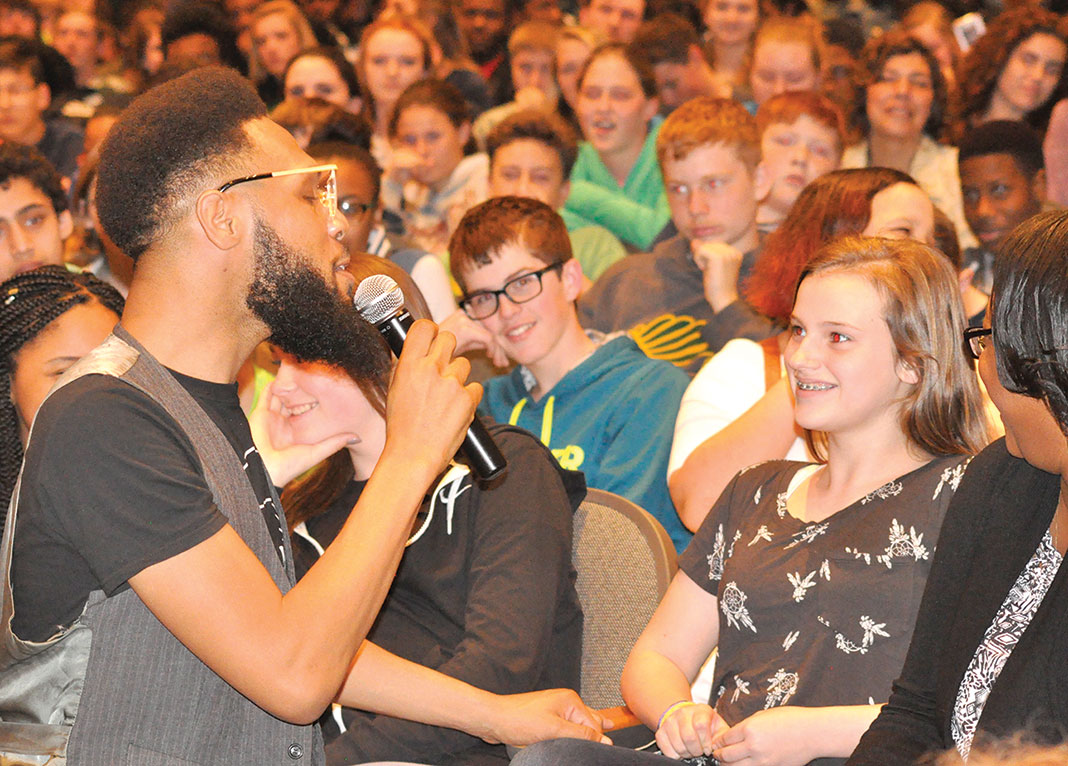 Terry Pinkard, who performs as TSoul, returned to his hometown of Burgess from Los Angeles Sunday and made a surprise stop at his alma mater, performing, greeting, signing autographs and taking selfies with students at all three Northumberland County schools Monday afternoon.

“I had to come home, to my real home,” said TSoul of Richmond.

TSoul is in the national spotlight as he advances on NBC’s “The Voice.” After being chosen for Team Blake [Shelton] during the blind auditions, he advanced again following Monday night’s battle round. After TSoul went head-to-head with teammate Josh Hoyer with the duet “In the Midnight Hour,” Shelton chose him as the winner of the battle.

TSoul urged the standing-room-only crowd at a combined NHS/NMS assembly to watch that evening’s episode of “The Voice.” He never let on whether he advanced or not. But he did smile.

TSoul earlier in the day made a surprise visit to the elementary school, where he delivered some motivational words, sang and signed autographs. He then surprised students and faculty of the middle and high schools. His visit was a well-kept secret. Even the teachers didn’t know why the students had been called to the auditorium for an assembly.

After telling the crowd he had a surprise guest for them, NHS principal Dr. Travis Burns stepped aside as TSoul’s soulful voice began to croon his blind audition version of “Take Me to the River” and the students and adults immediately knew who was behind the curtain. Cheers went up and cell phones came out as everyone started to film the local celebrity.

TSoul is a 2005 graduate of NHS who grew up in Burgess. He started singing in the choir at Shiloh Baptist Church and turned his musical passion into a career after attending Virginia State University. He has performed all over the world but said making the cut on “The Voice” is the big break he’s been hoping for.

“To get anywhere, you have to have faith…and consistency,” he told the students. “If you have a passion, follow it, work at it everyday and don’t give up.”

TSoul came off the stage and went into the audience looking for a would-be singer, where he found LMS seventh-grader Channing Reynolds. She joined TSoul in a duet of “Mary Had a Little Lamb.” He was so impressed by her vocals, he said she’d earned a TSoul tee-shirt.

TSoul also thanked about a dozen family members, including parents Terry and Karen Pinkard, for their continued support.

His battle round win moves him a step closer to the live shows, which his dad said they’d all make a return trip to California to attend. TSoul’s father and several other family members attended the blind auditions and appeared on television.

TSoul arrived in Northumberland last weekend but planned to only stay a few days before returning to California. “The Voice” shows airing now were pre-taped, he said. The show, which searches for the best-of-the-best vocalists around the country, will conclude Season 12 in May.