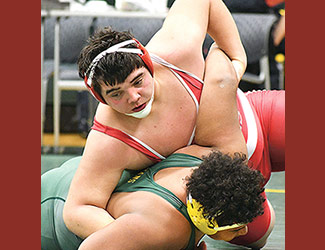 Lancaster’s wrestlers went unbeaten in back-to-back matches before the holiday break to improve the team record to 15-1.

The Red Devils went 3-0 at a Northumberland Quad December 17, beating the host Indians, 78-6, and defeating Mathews, 60-24, before shutting out Washington & Lee, 84-0. The Devils hosted the Lancaster Duals December 21 and went 5-0 to win their own tournament for the first time since it began in 2007.

“It was a great achievement for us,” said LHS coach Craig Oren.

“They continue to prove that the basic techniques mixed with intensity is a winning combination,” said Oren.

Lee and A. Wilmore are undefeated on the season.

“Michael [Bennett] is really coming on strong early this season,” said Oren. “He is a strong kid and is mixing in some solid technique. Tate [Wilmore] also had an impressive performance, where he showed a wide variety of techniques.”

Markel, Milton and Zeiler picked up two wins each.

Lancaster will be on the road this Saturday, January 4, for a tournament at Mathews High School.