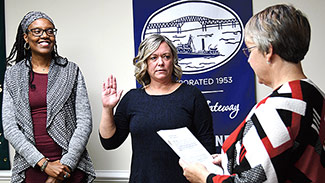 WHITE STONE—Town attorney Matson Terry advised the White Stone Town Council last week to refrain from supporting a resolution to make Lancaster a second amendment sanctuary county until it receives some input from the community.

Additionally, Terry told council he would like to hear the formal opinion of Virginia Attorney General Mark Herring before a declaration is passed.

More than a dozen Virginia counties have passed second amendment sanctuary declarations in anticipation of gun safety legislation being proposed in the General Assembly.

Boards of supervisors for Lancaster and Northumberland are expected to consider resolutions tonight, December 12.

“I have some reservations…