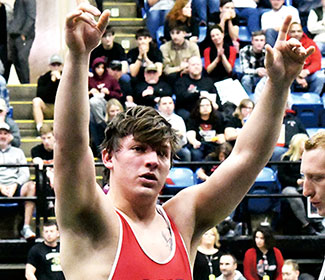 Adam Wilmore had trained for this moment his entire life.

The 18-year-old Lancaster High senior found himself for a second straight year in the spotlight at the Virginia High School League Class 1 state wrestling championships. He was wrestling an opponent he knew, one he’d even beaten a year ago.

“But this was his weekend. He was the bigger and better man.”

Wilmore, who carried an unbeaten 40-0 record into the state tournament at Salem Civic Center last weekend, was the Northern Neck District and Super Regional champion and the Region 1A wrestler of the year, along with being ranked number one in the state. Wilmore was the top 195-pound wrestler in the eastern part of Virginia. Eli Fortuner of Rural Retreat was his counter in the western part.

And as it should be, the state’s two best met on the mat in the final.

Wilmore got the first takedown…

We had a good year overall,’ says LHS coach

Lancaster took a record 12 wrestlers to the Virginia High School League’s Class 1 state championships in Salem last weekend and produced a state runner-up and had a first-year wrestler make the podium.

“It wasn’t the tournament we would have liked to have had,” said LHS coach Craig Oren, “but we had a good year overall.”

The Red Devils finished the regular season with a 19-1 record as the Northern Neck District champion and the Super Regional runner-up. They produced multi-district champions and the regional wrestler of the year in senior Adam Wilmore, who led LHS at the state championships as the runner-up at 195 pounds (see related story).

“I think in single A, the western side of the state has some impressive wrestling…[to-view-more]